Koala numbers in the wild

You are here: Home1 / Extinction2 / Koala numbers in the wild

KOALA NUMBERS IN THE WILD 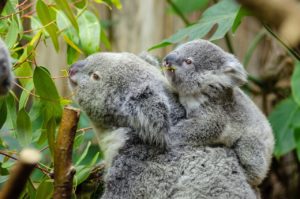 There is much ‘talk’ about the number of koalas currently surviving in the wild throughout Australia. So many ‘experts’ have differing opinions: from less than 40,000 to over 300,000. This site will report the claims made my reputable sources. What is certain is that koala numbers have declined hugely in recent times to an alarmingly low level that extinction in the wild now seems inevitable unless meaningful human action happens. Now,

Sadly, our Aussie icon is experiencing a rapid population decline.  Millions of koalas once roamed our land, but today, there is estimated to be fewer than 80,000 left in the wild.  They are threatened by habitat destruction, car strikes, dog attacks, disease and drought.  They are considered a vulnerable species and are truly in need of our support.  Let’s keep these true-blue Aussies around for years to come! read info 28.4.20

A review of the www.environment.org.au website – a lot of talk about koala population but no actual numbers quoted (28.4.20)  click link

There is no widely accepted estimate of the total population size for Eastern Australia’s vulnerable koala population. Official information on this is poor, notwithstanding the efforts over decades of an army of passionate people from community, government, Indigenous, research and consulting sectors who
have studied this endearing species. There is a genuine need for better estimates of population sizes and trends. A compilation of the latest survey and estimate data presented here shows there are currently 37 to 38 metapopulations in NSW with a likely total population size of 15-28,000 animals. Southeast Queensland has a likely population size of 5,000 to 20,000 animals. read the article

The World Wildlife Fund states that more than 480 million animals have been killed in the bushfires since September 2019. The WWF is concerned that the catastrophic fires are worsening the current “extinction crisis”. Its website highlights the Koala Triangle – from Noosa in Queensland to southwest Sydney and Gunnedah in the west of New South Wales – and expresses fears that in this region, the species could be extinct in as little as 30 years. read Coastbeat article (17.1.20)

In 2016, experts estimated that there are about 329,000 koalas in Australia, which represents an average of a 24 percent decline in populations over the past three generations. “It’s very difficult to estimate koala populations, even at the best of times,” Adams-Hosking says, because they have a very wide range across eastern Australia, and are human-shy and found very high up in trees. “Some populations are becoming locally extinct and others are doing just fine.”  read article published 25.12.2019

As many as 10,000 koalas — a third of New South Wales’ total population — are estimated to have perished this summer from bushfires and drought, an inquiry has heard. 15.2.20 link to article

ABC… BEHIND THE NEWS

“…since 2012 this iconic Australian marsupial has been listed as a VULNERABLE SPECIES [IUCN Red List of Threatened Species] … today there are less than 40,000 koalas left in the wild…  koalas have declined by 50% in the last 15 -20 years…  habitat loss though logging, climate change, rising sea levels …  (posted 13.6.17) link to article

“Australia’s total koala population has decreased from “millions” early last century to about 50,000 to 100,000, according to conservation groups. The decline was blamed on widespread hunting for the marsupial’s pelt, as well as introduction of diseases and the impact of development on natural habitats.” (posted 4.3.2015) Link to article

“Use of expert knowledge to elicit population trends for the koala (Phascolarctos cinereus): On the basis of estimates of mean population sizes for each bioregion and state, we estimated that the total number of koalas for Australia is 329,000 (range 144,000–605,000) with an estimated average decline of 24% over the past three generations and the next three generations. Estimated percentage of loss in Queensland, New South Wales, Victoria and South Australia was 53%, 26%, 14% and 3%, respectively.” (first published 5.1.2016) Link to article

“In addition to bushfires, habitat clearing, dog attacks and road accidents, between 2.5 and 3 million koalas were shot to supply the fur trade in America and Europe from the late 1800s to the early 1900s. In contrast to these astounding numbers, the current koala population is believed to be between 40,000 to 100,000 animals. (from website 1.7.17) Link to article

“…all koala populations, bar a few in eastern Australia, are in decline. Some sharply so. So whether or not you find, as we do, the most recent estimate of 329,000 in Australia (36,000 koalas in NSW) to be optimistic one thing is clear: koala numbers are a fraction of what they once were and the species is slipping away….The best way to protect koalas is a tried and tested one. The scientists that identified the crisis ecoregion problem also identified the solution: large, well-connected protected areas. Only by protecting and connecting remaining koala habitat can the government enact meaningful conservation. Everything else is tinkering round the edges….” (posted 16.1.2017) Link to article

“The current size of the koala population is unclear, according to the BBC’s Phil Mercer, with estimates varying from several hundred thousand to as few as 43,000. In New South Wales and Queensland, the numbers have fallen by as much as 40% since 1990.” (posted 30.4.2012) Link to article

“The near-extinct koala population on the Central Coast is facing complete wipe-out … As it stands, koalas are on a trajectory to be extinct in NSW by 2050.”… (posted 31.1.17) Link to article

“The Port Macquarie-Hastings LGA has an estimated 2,000 koalas, with 200 – 250 koalas admitted annually to its hospital…” From a report by Dr Christine Adams-Hosking, Honorary Research Fellow for WWF-Australia, May 2017

‘There’s an ongoing debate in Australia over whether the koala needs protection as an endangered species. One of the main problems is that it’s not easy to get an accurate count. We simply don’t have reliable numbers. (from  website 1.7.17 good article and reference) Link to article