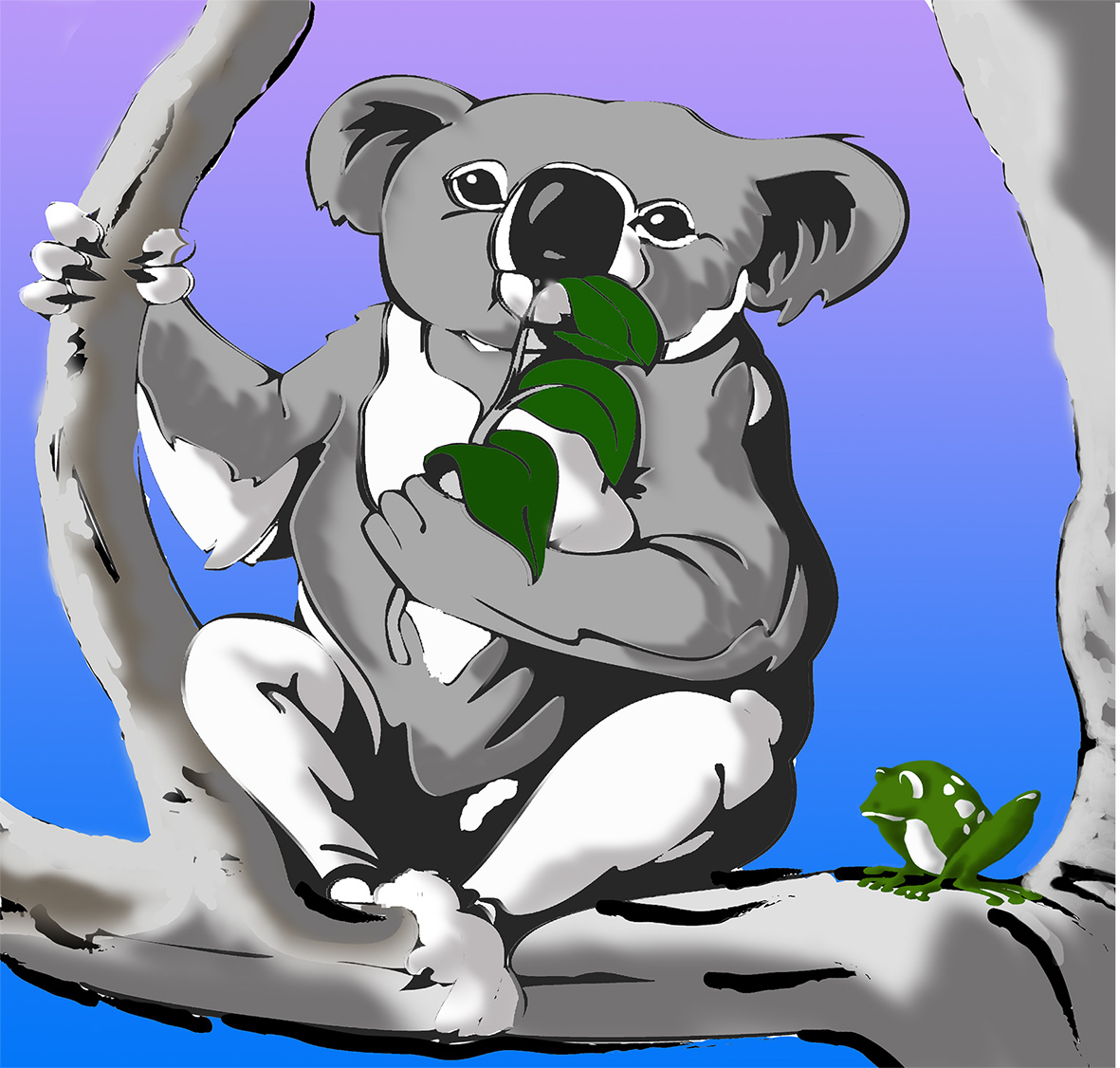 Artist based in Brisbane, Queensland, Australia

100 Artworks for a Koala entry: Title: ‘Frogey and a Koala’ – from an illustrated children’s book.

““There is a crises happening around the wildlife world, art for conservation is one way to inform and help saver wonderful environment.” Barry Ingham

Working as a professional Artist for most of his life, Barry’s enthusiasm for wildlife became apparent at an early age and then for drawing these subjects on school outings with his art classes, in the years to come he joined groups associated with wildlife and wild places.

Barry started painting wildlife while traveling in the early 1970’s and he successfully combined his love of mountaineering, bushwalking and diving with his artistic career, painting wild places and wildlife. He has worked in many areas over the years, tracking humpback Whales, sea lions and watching sharks along the coastline and following other wildlife in their natural habitat.

Ingham’s style has developed from the representational in his early days to photorealisum and then later to abstract but mainly concentrating on photorealisum as his main style of work. On a recent trip to Hinchinbrook Island he was struck with its amazing beauty and the magnitude of the area, coupled with a concern for the environment has provided the inspiration for a series of large abstracts of the area.

Barry is very meticulous. Most of the work  he does is with great detail and infinite ease. He begins a painting, not only with a sketchpad, but also with a ipad, studying the life, and what ever else is available  the habitats and the unique qualities of his subject. And when he finally does pick up the brush, his approach is the same. Breathing life into our wild life, and the landscape.

Barry’s reward is to see an eagle soar from his canvas. His fine detail awarded him an entry into many national wildlife art exhibitions. It has also won him public appreciation. over the years, Barry has produced over thirty limited edition prints, a number of which have sold out, and also created a publishing company, known as Wilderness Design Pty Ltd. As only some people can enjoy a Barry Ingham original in their lounge room, the release of his limited edition prints has made his artwork affordable to every one.

He has had a number of exhibitions in Brisbane and has exhibited in Sydney, Melbourne, Perth, Fremantle, Cairns, Hervey Bay and Maryborough, commissioned work from England, Switzerland, China, Japan and in the U.S. He has raised funds for a large number of Australian Conservation groups, the Cancer Foundation and Children’s organisations here in Australia.

Since 2004 Barry has worked for environmental groups only.

In August of 2006 Barry Ingham donated to the Australian Marine Conservation Society 1200 marine posters, so that the society could sell or to give away as a special offer to help raise funds and awareness for marine conservation in Australia.

He became a foundation member of the prestigious World Wide Nature Artists Group in Canada in 2006, joined Oceanartists Society in 2008 and the Australian Wildlife Art   museum in 2010. Elected President of the Queensland Wildlife Artists Society in 1990 and then establishing the Society to exhibit and the first selling exhibition to be held at the Queensland Museum, that was a landmark in his term of being President of the Society. He has been the subject of many articles in magazines,T.V. programs i.e. Totally Wild, and newspapers including Wildlife Australia, Australian Artist and numerous dive magazines and National Papers.