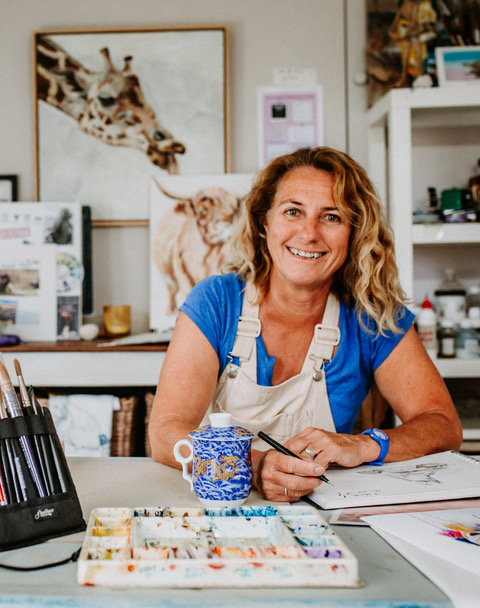 Artist and animal rescuer based on the Northern beaches of Sydney, Australia

” As an artist and animal rescuer I am drawn to the colour, noise and mischief of the Australian bush and its unique inhabitants. I strive to capture their personalities with my pen and brushstrokes to give them a voice amongst the human noise. My interactions with different animals often highlights how human actions and global developments puts our animal species lives in grave danger. I painted my two snoozing Koalas, peacefully slumbering unaware of what may happen next around them. It could be fire, deforestation, drought or even infection but who and how are they going to ask for help? ” Jules Lawson

Following a passion for drawing since an early age, Jules Lawson undertook a visual arts diploma at Northbridge School of Arts, Australia in 2005. Her work has been exhibited locally and regionally around NSW, Australia since 2002, with gallery representation on the Northern Beaches, Sydney, which has led to many commissions.

Moving to Singapore inspired Jules to try alternative art techniques and subject matter, culminating in a change into oil and acrylic mediums, with the use of more vibrant and bold colours as a reflection of the Asian environment. Following two successful Singapore exhibitions, Jules has continued to work in a variety of mediums producing works influenced by the cultural frame, everyday life images and the surrounding environment.

Returning to live in Sydney, Australia rekindled her love of nature and passion for watercolours developing her own pen and wash style, to depict snapshots of life which are powerful in their simplicity. With serene mark making and gentle hints of colour Jules creates a fine balance of tranquility and personality. Her works show a perfect moment in time, a glimpse of something greater, a single frame of an untold story. They exude a vibrant stillness which captures the imagination of the onlooker.