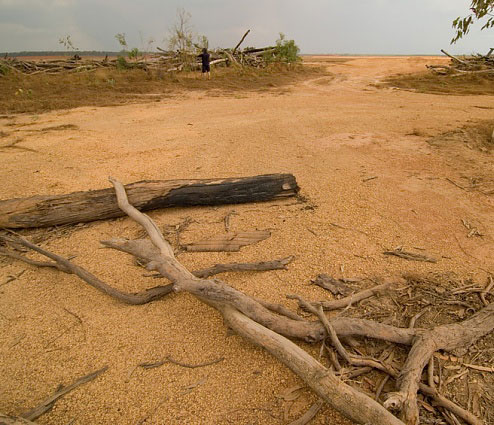 Why we need stronger laws to protect our precious wildlife and nature.
Australia is home to some of the most unique and magnificent nature in the world. Our country has vast savannahs and grasslands, tropical rainforests, endangered gum forests and diverse woodlands that provide shelter to our most precious threatened species.
Yet, Australia is one of the worst developed countries in the world for broadscale land clearing – killing tens of millions of native animals (including threatened species) and wiping out endangered forests and woodlands. In fact, we’ve cleared nearly half of our forest cover in the last 200 years!
Facts about land clearing in Australia that reiterate how badly we need stronger laws to protect our precious wildlife and nature.
Around 5,000 square kilometres, of virgin bushland and advanced regrowth are cleared annually. In addition to destroying native wildlife, it is the major cause of salinity and causes around 14% of Australia’s greenhouse gas emissions.1
Australia has lost 25% rainforest, 45% of open forest, 32% woodland forest and 30% of mallee forest in 200 years.2
The effect of these changes has been considerable. Around 20% of Australian mammals,  7% of reptiles, 13% of birds are listed as Extinct, Endangered or Vulnerable.3
More than 100 species have gone extinct in NSW in the last 200 years.4
Currently 1,000 animal and plant species are at risk of extinction, including the koala.4
Australia has one of the highest rates of tree clearing of any developed country historically. In the past, we’ve cleared more bush each year than poverty-stricken countries like Burma, Mexico, Zimbabwe, Nigeria and the Congo.5
In New South Wales, the government is planning to follow Queensland’s lead by ripping up their native vegetation laws.
Australia’s greenhouse gas emissions from tree clearing could spiral further out of control. … Emissions from tree clearing from 2016 to 2030 are projected between 673 and 826 Mt CO²e without substantial policy change. By way of comparison, this is the equivalent of operating at least three to four extra dirty Hazelwood coal fired power plants for this same period. CO2 Australia.
read the full article
https://livingwithkoalas.com.au/wp-content/uploads/2017/09/Tree_clearing.jpg 425 494 Glen Cavaco https://livingwithkoalas.com.au/wp-content/uploads/2017/08/logo_web.png Glen Cavaco2017-09-27 10:21:522017-09-27 10:21:52Land clearing in Australia
80% of Australia’s Eucalypt forests cleared