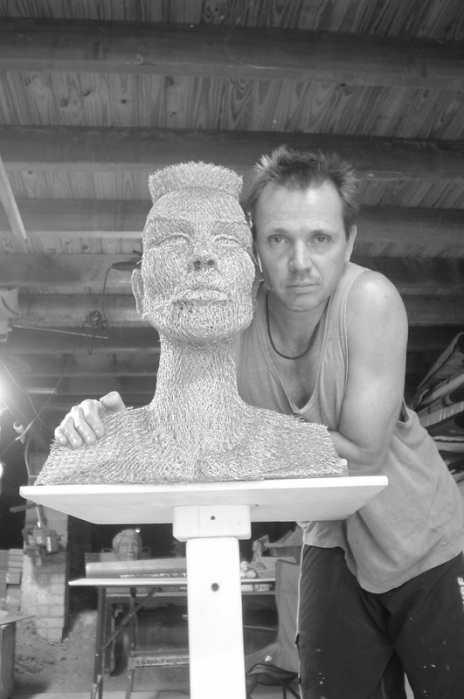 Sculptor based on the Gold Coast hinterland, Queensland, Australia

“ How could I not accept G’s offer to support LWK’s [Living with Koalas] endeavours in koala conservation, by contributing a piece of art to this project? Our great Australian icon is growing increasingly vulnerable to extinction, and action must be taken now to protect our national treasure, and conserve their rapidly dwindling habitat. “ Ivan Lovatt

Ivan LOVATT: Born in Kenya, Ivan spent his childhood in Africa, England, Wales and Germany before emigrating to the Gold Coast Hinterland in 1994.  Ivan enjoys creating unique, engaging, and dramatic sculptures for indoor and outdoor exhibition, with huge appeal to people of all ages. His work is characterised by his ingenuity and innovation and realism. He takes delight in transforming the ubiquitous ordinary chicken wire, into the extraordinary, with a medium that lends itself to the sensitivity and delicacy of his expression.  In 2007 the Jackman Gallery hosted Ivan’s first solo exhibition, a collection of busts of famous personalities. Then Ripley’s (Believe it or Not) Museums commissioned him to create more celebrities and historical figures for their museums across the world.

Ivan’s work has been commissioned for public and private exhibition across Australia and internationally.   He has won numerous awards including Gold Coast, and Royal Brisbane Shows and Swell Currumbin Sculpture Festival People’s Choice, Children’s Choice,  Small’s Gallery People’s Choice, and Artist Peer Awards.   He has participated in the “Sculpture by the Sea” festivals in Bondi, NSW and Cottesloe, WA, and Gold Coast Art Festival, Toorak Village Festival and Woodford Folk Festival.  A collection of his work is on permanent outdoor exhibition at “Lion Pride Lands”, Taronga Zoo, Currumbin Sanctuary on the Gold Coast and the Bluebird Museum in Dumbleyung, W.A.

Ivan’s sculptures have featured in national and international newspapers and magazines including The Australian, The Sydney Morning Herald, The Telegraph, and magazines such as the Art Almanac, Cloth, Paper, Scissors, and several editions of Australian Art Collectors. He has also featured on television shows including ABC’s State Line, and Australia Wide, and Channel 9’s Extra, and The Great South East.

Ivan Lovatt: in 2007 the Jackman Gallery hosted Ivan’s first solo exhibition, a collection of busts of famous personalities. Then Ripley’s (Believe it or Not) Museums commissioned him to create more celebrities and historical figures for their museums across the world.