Here is an extract from the Huffingpost (7.11.17) and an inteview  with Ian Darbyshire, CEO of the Foundation for National Parks & Wildlife in Australia

Australia is running out of Koalas

Once widespread across Australia, the past 20 years has seen koala numbers decline dramatically, for some populations by as much as 80 percent. Ian Darbyshire, CEO of the Foundation for National Parks & Wildlife told HuffPost Australia. “In the past five years, we have seen the population go from about 100,000 to 40,000. At this rate, they will be extinct by 2040.”
So what is causing this rapid decline? And what can we do to reverse it?

“There are a lot of different factors, but habitat loss is the main cause,” Darbyshire said. …  Furthermore, you get habitat loss breaking down the connectivity between trees, so quite often these days you’ll see koalas crossing the road. When they are down on the ground, that’s when they are vulnerable, not only from traffic but also from dogs.” Darbyshire said a fragmentation of koala population has also led to further problems for the marsupials. 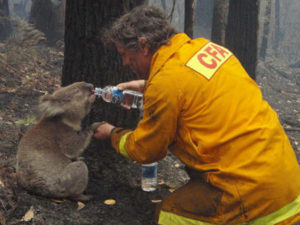 “You can drive around the country and see koalas, they are widespread but local,” he said. “And their population is fragmented now. That leads to inbreeding, disease and stress. We are seeing Chlamydia become a real issue and that’s because the population is getting stressed. And tragically, Chlamydia affects their ability to breed and they can also lose their sight.

It’s tragic because the koala is a national icon, it’s a very important economic contributor for Australia’s tourism …

Other issues koalas are facing include large scale fires and climate change, both of which can result in koalas forcing to relocate, which is actually problematic in itself. “It’s not easy to relocate koalas as they tend to be quite choosy about the trees they’ll eat. They have to have flora that’s developed to the area they are in. You can’t just take from one area to another. You have to make sure you introduce the right bacteria into their gut,” he said.
“Males are very territorial as well, and as food gets scarce a male might roam several kilometers. You can’t then just stick another male in his territory. You really have to understand what you are doing.”
In terms of what you can do to help, Darbyshire said it all starts with education. “I think the public needs a fair bit of education and support to understand they do need help. We need actions from individuals to make sure they have koala-friendly fences, that they have their dogs under control. If you see one on the road, help it across,” he said

We should be doing more to help them..

A koala can’t live anywhere else on earth. They are animals unique to Australia, and they can’t adapt as fast as we are changing the environment around them.
If you’re in an area where koalas can be found, Darbyshire encouraged you to leave water out for them on hot days and also to make it easy for koala to travel from yard to yard. “Lean a pole on your fence or plant a tree so koalas can navigate backyards,” he said. “They are having to travel further for food, which sees them [forced to navigate suburban areas] and puts them in the path of dogs.
“Koalas can be found throughout Queensland, down to New South Wales and Victoria and South Australia. So if you live in these areas, think about planting the right trees, giving them connectivity from tree to tree, controlling the burn, keeping the vegetation for them… it all helps.
“They can only have one young a year and have to be about three years old until they can have one. We are moving much faster than they are.
“Australia has a big issue – Australia is wiping out its mammals faster than any other country on earth. We need lots of help for our native species. Talking about the koala helps because it’s iconic. It’s the cute cuddly Aussie.
“But it won’t be here for much longer if we don’t take action now.”

LIVING with KOALAS echoes the sentiments above and the more we research the more we are convinced of the facts stated in this article. Please remember: the difference between human action & inaction is… extinction for the wild koala.